Vladimir and its World Heritage sites

By Olga Arakelyan January 21, 2012
Hi there! How are you?
This year is starting with some exciting changes for my blog. As you know, I am going to share more useful links with you. Well, this is not all. As a translator specializing in tourism, I often translate very interesting texts about places of interest in different countries. Then last year I really fell in love with the blog hosted by my colleague Olga Tkachenko. She lives in Siberia and writes about her region with great love. Olga's blog reminded me that Russia is full of stunning places. And it gave me inspiration to share something very important with you. The love for my city, Vladimir, which is by the way a great tourist magnet.

No doubt, Vladimir is a very special place. I love taking long walks in the center because the scenery is often so beautiful that it takes my breath away. Vladimir also belongs to the Golden Ring of Russian cities. The ancient cities included in the Golden Ring played a huge role in Russian history and are often called open-air museums. Vladimir is specifically famous for its three monuments included into UNESCO World Heritage list. Here they are: 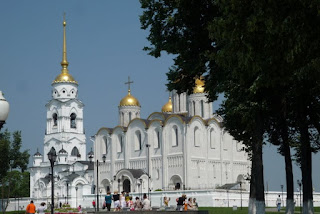 It used to be the main Russian cathedral, before Moscow became the Russian capital. It is beautiful. Besides, there is a beautiful park around it. Oh, I forgot to say that it's a working church, and there's a monastery not far from it. Ladies, don't forget a long skirt and a cover for your head if you want to attend an Orthodox service (men don't have to think about such things, lucky them!). But they also have special hours for tourists and you don't need any special clothes then. 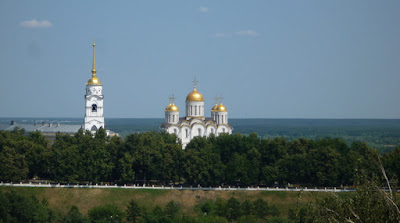 This is the same Assumption Cathedral and its park. The picture was made from another park called Patriarch's Gardens (Патриаршие сады). 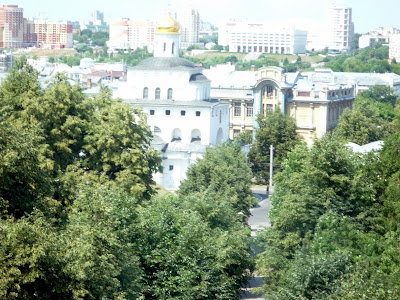 This picture of the Golden Gate was taken last summer. In the Middle Ages there used to be several gates into Vladimir. But only the Golden Gate (the main entrance) has stayed with us through the ages. It is not just beautiful from outside. There's an exhibition inside, too! There you will see a panorama of the Mongol destruction of the city in the 13th century. The rest of the exhibition is mainly dedicated to the wars that Vladimir citizens took part in. You will also be able to see the Russian armour of different ages and the soldiers' clothes. 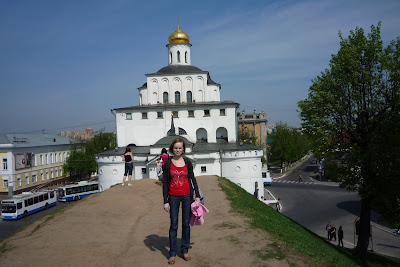 This is also the Golden Gate. I am standing on the remnants of the fortification walls, now called Kozlov Val (I hate this picture of me, but the Golden Gate looks really good here).

It's a shame, but after looking and looking through my photos I realized that I don't have ANY pictures of this architectural masterpiece, so I borrowed the picture from this website. You can read some interesting facts about St. Demetrius Cathedral there.
Sad to say, the Cathedral was greatly damaged in the Soviet times. Sometimes we hear news that it is open for tourists, but when I come to find out if it is true I always find it closed. The restoration specialists keep working on preserving this wonderful monument. They say that it has some of the best samples of ancient frescos inside. I hope that one day we'll be able to see them with our own eyes.


Of course, the list of interesting places in Vladimir goes on and on! These are just the main three tourist attractions since they are included into UNESCO World Heritage list! This year I will publish more posts with the city views and will do my best to share more interesting info with you!