How we celebrated New Year 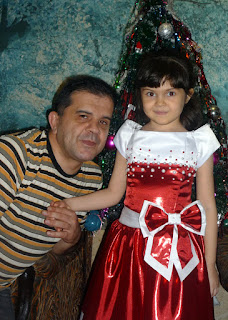 As I promised in my previous post, here are some pictures of our New Year. First, on December 28th there was a New Year party in my daughter's kindergarten. They staged "The Snow Queen" by Andersen.

Kids had great fun, there was a lot of dancing, singing and playing. Oh, and they got their first sweet gifts, too!
When I say "sweet" gifts, I literally mean sweet. It's a custom in Russia to give packages of candy to children at New Year and Christmas time. They get lots of candy. We are still eating the candy my daughter got ;)

In some families kids go to bed on December 31st just like in any other day. In our fam it's the only day they are allowed to stay up as long as they can/want. This time Delia went to bed at 4 a.m.
We stayed home since the weather was too warm and damp to go out (Very unusual for our winter here! Almost no snow at New Year in Vladimir!). But we had lots of fun. We sang songs, had good food (most of it was cooked on December 30th, so I enjoyed my time on December 31 as much as I the other members, apart from finishing some work before my New Year break). You know already that Ded Moroz brings gifts to children, right? Well, in our family the gifts appear under the tree exactly at midnight. Nobody knows how that happens while nobody is asleep. Maybe Ded Moroz uses the minutes when children run to another room to watch fireworks, who knows ;)
This time everything went exactly as planned for Ded Moroz. The gifts appeared under the tree right on time and nobody saw who put them there :) After that adults could finally watch TV, relax with a cup of tea and some delicious cakes while Delia and her cousin were exploring their gifts and playing. I love this family time. More than anything.