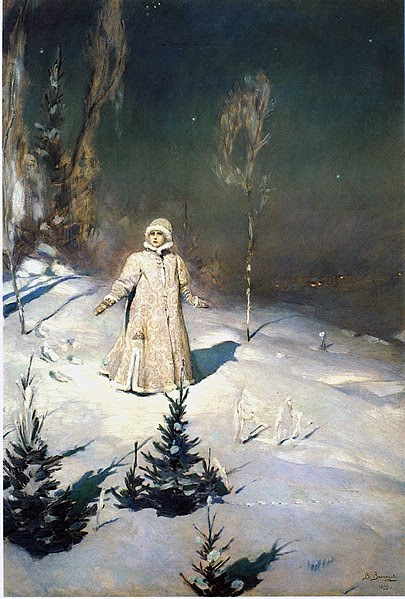 Last year I wrote a post about Santa Claus and Ded Moroz. There, I mentioned a character called Snegurochka, or Snow Maiden in English. I recently came across a wonderful article in Russian on one of my favourite websites, so I thought that I definitely need to share at least some of its most interesting parts so you can know more about this beautiful legend.


Snegurochka comes to children with Ded Moroz every winter. There are no other countries which have a feminine mythological character like Snegurochka. Actually, in Japanese folklore there's Yuki Onna (snow woman), but it's a different type of character which has a demonic nature and brings snowstorms.


Ancient Snegurochka
In ancient times, when Russia was still a pagan country, people used to make snow idols. Children and adults made snow figures in order to protect themselves from evil spirits. The legends say that figures of young women could actually come to life.
Nowadays making snow and/or ice figures has become a form of art.

Snegurochka in fairy tales
In Russian folklore, Snegurochka is not related to Ded Moroz. A childless elderly couple makes her and in the end of the fairy tale she melts from heat. It may be a reflection of another myth about seasonal spirits that die when seasons change.

Snegurochka in literature
All tales and legends about Snegurochka were carefully gathered and written down by Afanasiev. Later, our well known writer A.N. Ostrovsky created a play called "Snegurochka". There she is described as a daughter of Ded Moroz and Vesna Krasna (= Beautiful Spring). She is a stunning young woman with a pale face and blond hair, dressed in long write and blue coat, warm mittens and a fur hat.

Snegurochka in music
In 1873 Chaikovsky composed the music for Ostrovsky's play. The music is very cheerful and joyful. In 1882 Rimsky-Korsakov made an opera based on this music. The opera was a huge success.

Snegurochka and Kostroma
Kostroma is an ancient Russian city. Every year on April 2 Snegurochka's birthday is celebrated there. Why do they celebrate it? Because Kostroma is considered Snegurochka's native city (it was a small village when she appeared though).

New Year celebrations
Snegurochka first appeared in post cards and started coming to children's parties in the 19th century. Girls used to dress like Snegurochka, kids enjoyed taking part in drama skits about her. That was the time when they started selling Christmas tree decorations in the shape of Snegurochka, that's how popular she was.
After the revolution, Christmas celebrations with Ded Moroz and Snegurochka were prohibited. They came back into the life of Russian people in 1935. That's when parties with a Christmas tree (now called New Year tree) were allowed. Snegurochka as a part of celebration was approved a bit later, in 1937. Since then, she's been coming to Russian children every year. She takes part in all New Year celebrations, plays and dances with kids. She usually wears white or blue clothes and a fur hat or a crown on her head.

Well, that's it! Hope you enjoyed this article :) Wishing you a fruitful week!
Olga