By Olga Arakelyan September 10, 2012
On Saturday Delia and I were invited to a very interesting exhibition. There were wax figures of different mythological characters of Russia and other countries. Plus the figures could move and some of them could speak (well, they didn't move the mouth, but we could hear their voice). Both Delia and I loved the exposition and were sorry that there were not so many figures.
And then I thought that you might probably be interested in some of the Russian folklore characters we saw there. The hall of the exhibition was pretty dark and unfortunately my camera refused to take high quality images in this case. But I think you can still get an idea of what all the characters looked like.

Of course there was Baba Yaga: 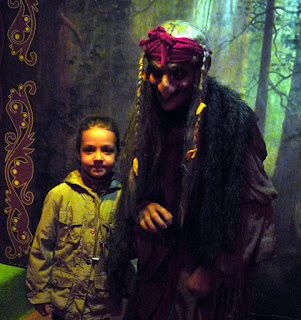 Then there was Koschei the Immortal. I loved that figure! It was absolutely in tune with my perception of Koschei. 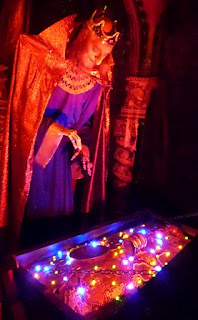 According to Pushkin's poem, Koschei loves to count his gold. So that's what he was doing at the exhibition.

Here's how Baba Yaga's hut looks like inside. All magical and evil elements are there: spiders, a human skull and cats. The Russian folklore mentions a special cat called "Кот Баюн" (Kot Bayun). Literally, it is a cat who sings songs. This cat has a magical voice and if you don't resist its power and fall asleep the cat will eat you! According to the legend about Baba Yaga and Vasilisa Prekrasnaya the can lives in Baba Yaga's hut. You can read more about Kot Bayun in this Wikipedia article (in Russian). 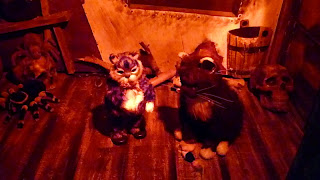 There were two cats in this hut at the exposition.

And here you can see the throne of Koschei. Do you like it? Looks kind of scary to me with those two skulls. 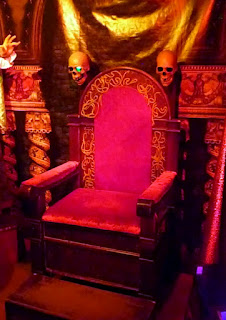 But Russian folklore is not all about evil. Of course, there are also good characters.

First of all, there was a Russian bogatyr. The exposition staff was sure it was Ilya Muromets, but to me he didn't look strong enough to be Ilya. I think he looks more like Alyosha Popovich. What do you think? 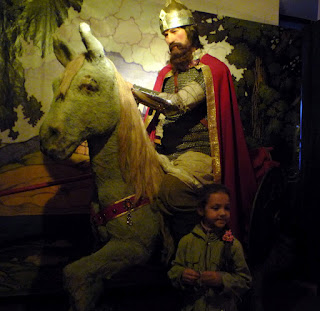 Then there was Ivan-tsarevich (prince Ivan), a good character of Russian legends who saves girls from Baba Yaga, Koschei and the rest of the bad guys. And as I was writing these words I realized that I didn't take a picture of him.
But here's Vasilisa Prekrasnaya for you! Probably she's Vasilisa Premudraya, the daughter of Koschei, I don't know. And the staff of the exhibition wasn't too sure about that either :) 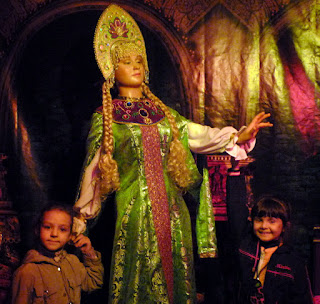 And here's Alyonushka, whose brother Ivanushka didn't listen to her and turned into a goat :( That's why she's so sad. Hey kids, you'd better listen to what your parents and older brothers or sisters are saying! Of course if you don't want to become a goat ;) 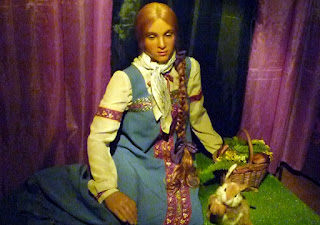 But don't worry, another kind and handsome prince saved them both and killed Baba Yaga, the real source of all their sorrows. You can read the full story here (in English and in Russian). Unfortunately the prince's figure wasn't there. But he probably looked like that:

This is a picture painted by Vasnetsov called "Prince Ivan on the grey wolf" ("Иван Царевич на сером волке").

Well, I hope you got some glimpse of the exhibition. Did you like it?

P.S. You are probably wondering why Delia looks so different at some of the photos. That's because it's her best friend there :)